HomeBlogThe Impact of Avoidance in Relationships

The Impact of Avoidance in Relationships 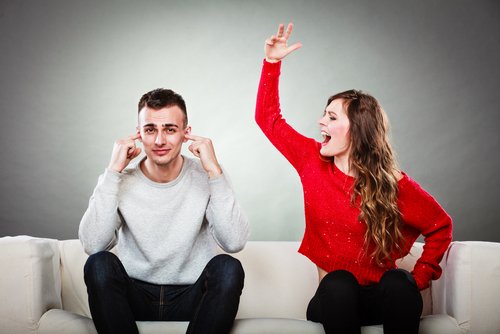 The Impact of Avoidance in Relationships

Silence isn’t always golden. It can be grating, isolating and hurtful to be in a relationship with a partner who is silent or avoidant of conversations they deem might be difficult. At its worst, silence can push the person on the receiving end into extreme behaviours through frustration, sometimes resulting in the relationship breaking down.

Sian Jones, an experienced relationship therapist explains, that in general (but not exclusively), avoidance is something women complain about with their male partner rather than the other way around. It is also one of the most common reasons that lead women to seek relationship counselling.

If you are in a relationship with an avoidant partner the following exchanges might sound familiar.

“Don’t you have anything to say?”

“Well what do you want me to say?”

“I don’t know! But anything would be nice!”

I can’t tell you how many times I’ve heard a female client say, “I feel like I’m talking to a brick wall. I get nothing back and I feel hurt, frustrated and resentful!”

When our feelings are hurt in our relationship we all cope with it differently. Some people shout and want to address the issue immediately. Others prefer to avoid the problem at hand and instead mask their emotions. Some people choose to deny the emotional experience altogether, pretending that they are not feeling anything at all.

Sian explains that it can be all too easy to point the finger at the person who shouts, because their behaviour is overt. However, little thought is given to the damage a silent avoidant can do to a relationship. In my experience, through working with many couples over the years, it is clear that silence, however well-meaning, can have a massively detrimental effect to the non-avoidant partner.

Interestingly, a research study by Ryan B. Seedall shows that individuals with high levels of emotional avoidance have higher rates of conflict in the long-run. They also report lower levels of relationship satisfaction than those who face their problems as they arise. Ref: Seedall, Ryan B., and Karen S. Wampler. The role of attachment avoidance (2012)

The impact of avoidance on your partner

For the vast majority of people with a problem in their relationship, it is completely natural for them to want to discuss it with you. If their feelings have been hurt they may want to explain why.

However, your partner’s attempts to communicate might seem clumsy to you. Perhaps they might be repetitive in their explanations in order to try and get you to understand. Or maybe you feel as if they are critiscising you.

The truth is ‘they just don’t feel they are being understood’. Their feelings over the situation are met with silence from your end because you feel mistakenly threatened and so become defensive. You simply withdraw (avoid/flight), refusing to participate in the conversation, saying something like “Oh…whatever…” or “Just leave me alone” or “stop moaning at me, I can’t do anything right!” The avoidant partner begins to feel anxious so will avoid the conversation and try and get away.

When we bury our feelings, we are decreasing the potential for greater intimacy. People often say that they don’t want to offend or hurt the other person; hence, they refrain from speaking their mind.  However, often the real issue is the individual’s discomfort with intimacy and the fear of transparency. It seldom has anything to do with the other person; it’s basically a self-defensive mechanism.

Other common reasons behind avoidance

Trying to avoid an argument/confrontation. Sian explains that during her relationship counselling sessions men often say that they stay quiet because they don’t want to cause an argument.  Some avoidant people report to having the fear that a conversation that might go on for hours. So, they would rather have a quick fight about why they don’t talk than a long fight about anything else.

Don’t know what to say. During a relationship counselling session, a common response from an avoidant male when asked why they avoid talking to their partner. Is ‘because I don’t know what to say and I think I am going to say the wrong thing” This again tends to about a fear of having an argument. Sometimes men think that they have to ‘fix’ the problem. When more often than not their partner just wants them to listen and understand their feelings.

A fear of vulnerability. Talking about emotional topics can leave us feeling vulnerable, which can be quite scary. Because by doing so we expose ourselves to those specific things we don’t want to experience – pain, hurt, disappointment, shame, failure and so on. Usually based on our past experiences.

More often than not, we’d rather be “safe” than risk looking bad, making things worse or doing damage to ourselves and our relationship.

However, the only thing really at risk is only our ego. It might take guts to engage ‘difficult’ conversations. But deep down, we do know that nothing ‘bad’ is going to happen. The worst it might be is a bit uncomfortable. Avoiding the conversations is ultimately much more damaging to us and our relationship. Rather than taking the risk, listening to our partner and talking about our own perspective.

Help for dealing with conflict or difficult conversations

1) Take responsibility. It always “takes two to tango.”  Taking responsibility is not about attributing fault or blame. It’s about owning up to the situation and recognising that not only are we part in the issue, but what we are ‘thinking’ may not necessarily be true. It’s also about honesty when expressing our thooughts/feelings.

2) Address the conflict directly. Conflicts are always managed most effectively when they’re dealt with directly and promptly. Allow yourself to be honest and vulnerable when you approach your partner with an issue, but make sure you do it as soon as possible and don’t let it fester.

3) Listen to understand. As challenging as it might be, the best approach in any difficult situation is to listen with as much understanding and empathy as possible. Even (and especially) when we are feeling angry or defensive. It is important to understand if your interpretation of the situation, was in fact correct.  If we understand where the other person is coming from, even if we don’t agree, we have a much better chance of being able to work things out.

4) Use “I” statements. If your partner does or says something and you have a negative reaction to it, that’s natural. However, before we start judging, making sweeping statements or accusing them of something. It is important to take a breath and think things through.

When you start a conversation, beginning the sentence with ‘I’ and not ‘you’ is key to not evoking conflict. For example. I felt you weren’t listening when I was talking to you earlier and it hurt my feelings”. Rather than “You weren’t listening to anything I said. You always do that and it really upsets me!” This isn’t necessarily true. It may be just your interpretation/opinion and starting with ‘you’ will most likely trigger a defensive response.

5) Compromise. The only real way to properly resolved conflict is if it’s a win-win for both parties. This doesn’t necessarily mean that each person gets his or her way. It means that each person has the opportunity to talk and to feel heard. When a compromise is made, both parties feel empowered and in a partnership.

A healthy, happy relationship is one were both feel you are able to say or ask absolutley anything. Without fear of the other getting annoyed and defensive. If this is an issue, then you’ll never be able to fully grow as a couple.

If you are experiencing this problem and would like to talk to one of our professional Relationship Therapists. Contact us at Relationship Counselling Kent Today. Booking Request